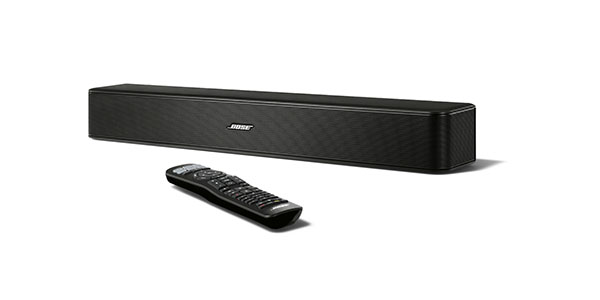 If you are simply looking for good sound quality for watching TV, then the Bose Solo 5 should be satisfying. However, without a subwoofer, it does not have the kind of sound that you feel coming at you. It is a nice sound bar system for people that are especially concerned with the clarity of the sound and it is really easy to use.

The Solo 5 from Bose will definitely be an improvement upon the standard built-in sound system on the TV, but it does leave some things to be desired. It is a 2-channel system and it sounds great, but with no subwoofer, you don’t get impactful sound like you would with some other systems. That being said, the sound is crisp and clear for a much better listening experience.

The Solo 5 is, at the time of writing, the #1 Best Selling soundbar on Amazon.co.uk. Find out why…

This system also has a dialogue mode that helps to distinguish the voices on the screen from other sounds. It also comes with Videostage and TrueSpace technology for a sort of simulated surround sound. With these effects, it does do a better job of filling the room with sound.

The set up on this system is pretty easy and straightforward. It is just a standalone sound bar, so there are no additional speakers to run wire for or attach and it can take its sound directly from the television for every source. The user has three options for connecting the sound bar to the television, it comes with plugs for optical, coaxial and it has a 3.5mm auxiliary input. You just plug the one cable into the TV, connect the power supply and the sound bar is basically ready to go.

For further convenience, this system also comes with a universal remote. The remote can be used to control the Bose system, but it can also be programmed to operate the TV, a DVD player and a set top box. Having all of your controls in one place does make things much easier.

Read what 186 Amazon.co.uk buyers have to say about this model…

Along with being great for enhancing the sound of your TV shows, games and movies, it can also connect wirelessly with mobile devices. The Solo 5 is Bluetooth capable and you can stream music from devices like a Smartphone or tablet.

The one functional feature that would make this system a little better would be a display to show the volume level and status. It does have indicator lights for the system status and the Bluetooth, but with the volume, you are left to play it by ear.

Check out the Bose promo video below

Find the best price for the Bose Solo 5 below